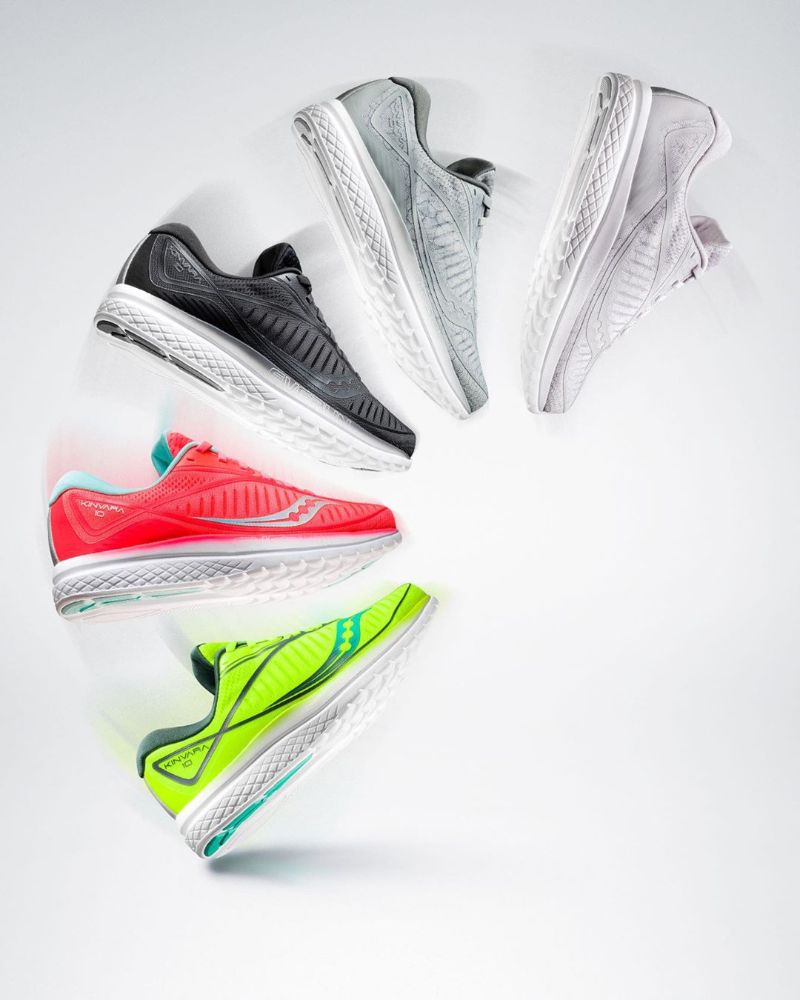 Saucony (Sock-uh-knee) was founded in Kutztown, Pennsylvania on the banks of the Saucony Creek – from where the company took inspiration for its name. The logo represents the Creek’s constant flow, and the boulders lining its bed. By 1910, the factory was churning out around 800 pairs of shoes a day. The brand was determined to break into the athletic community which was steadily growing in popularity, introducing their first running shoe, the 7446 Spike. But it wasn’t until the late 1970s when the company found its real fame, gaining notoriety as the running powerhouse it is today. It was no longer a hidden secret, but the only running shoe worth having. Among sneakerheads, the throwback sneaker, the Jazz is the most popular and has been one of the brand’s best selling shoes. It wouldn’t be uncommon to see fans spotted in the brand’s Shadow style, but with the Jazz prominently featured among its early collaborations with the likes of Bodega it remains the brand’s fashionable crossover.

Saucony is established in Pennsylvania on the high banks of the Saucony Creek.

With two of its signature running shoes hitting Runner’s World Top 10, Saucony’s reputation grew as a running powerhouse. It has continued to make strides with innovations and developments ever since.

Saucony introduced the Jazz sneaker. The brand worked closely with podiatrists to create a running shoe that kept runners comfortable and able to handle the impact of distance running. The Jazz is still one of the brand’s most popular sneakers and is often the first to appear in collabs.

Runner Rod Dixon finishes the NY Marathon in spectacular fashion – coming from behind the 26 mile mark to win the race by nine seconds. Afterwards he works with Saucony engineers to create the DXN – personally testing each iteration of the shoe.

Saucony builds on the Jazz to create the Shadow, which boasts a more supportive heel cup.

The brand kicks off its first collaboration with Bodega with the Courageous TR. The two have continued to collaborate since.

Known for their Wolverine boots, Wolverine World Wide purchased Saucony in 2012 – adding it to its subsidiaries like Keds and Cat among others.

Saucony collaborates with Boston neighbors Dunkin’ Donuts to create a limited-edition donut-themed collab ahead of the Boston Marathon. The pair upped its game with yet another design in 2019 featuring sprinkles and a pink donut medallion on the laces.

Saucony adds new ISOKNIT technology to its sneakers – combining the ISOFit system with a knitted upper to enhance breathability.

Saucony’s innovative running technology has cemented its position as the go-to trainer for serious and hobbyist runners alike. Boasting a motto of “we exist for runners” it has grown from creating children’s shoes in 1898 to a running powerhouse, continually topping the running community’s annual shoe reviews with styles appealing to the most sluggish of fashionistas whose only exercise is running to cop the latest Saucony collab.

The 24 Best Sneaker Brands to Turn to When in Doubt — a Complete List
SneakerssponsoredNovember 24, 2022

Neutral Shoes Are the Key to Every Versatile Sneaker Rotation
SneakerssponsoredMarch 12, 2020

Here Are the Best Kicks for under $150
SneakerssponsoredAugust 6, 2018