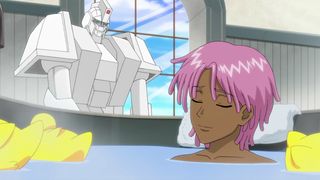 After teasing the project earlier this month on Twitter, Jaden Smith officially makes his animated debut in Netflix’s new series Neo Yokio, which launched today on the streaming service.

This original anime-inspired series is the brainchild of Vampire Weekend lead singer Ezra Koenig, serving as the creator, writer and executive producer of the six-episode show. While Smith may be the protagonist in the anime, he’s aided by a star-studded cast of voice actors including Jude Law, Susan Sarandon, Tavi Gevinson, Jason Schwartzman, and comedic internet duo Desus and Mero.

The show is set in the postmodern city of Neo Yokio, which looks an awful lot like a futuristic cross between Manhattan and Tokyo. “Neo Yokio is the greatest city in the world. It is a diverse labyrinth of cultural and architectural innovation. Of course, whenever a city becomes the envy of the world, problems are bound to arise,” the trailer explains.

It centers on the teenage exploits of Smith’s character, Kaz Kaan, as he deals with heartbreak, black magic, and reluctantly assuming the legacy of his family as a demon slayer in order to save the city from imminent destruction from forces unknown.

While the offbeat nature of Neo Yokio isn’t your typical anime in that it combines certain aspects from the genre, it injects stylish and futuristic elements like couture fashion and bloggers — something that’s more relatable to audiences today.

You can catch all six episodes of Neo Yokio today exclusively on Netflix.

Sponsored Story
What You Need to Know About both, the Parisian Footwear Brand Favored by Jaden Smith
SneakerssponsoredDecember 2, 2019
What To Read Next
Load More
Search Results
Load More