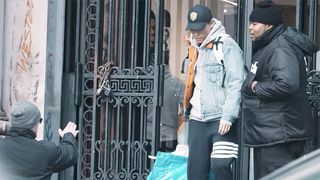 Yesterday, CNN published an investigation into how and why Supreme Italia — the “other” Supreme trademarked in Europe — is technically legal.

The report starts by documenting the growth of the James Jebbia-founded OG brand, with Highsnobiety CEO David Fischer explaining the “huge frenzy” behind the label’s drops.

“It became a huge event, where Supreme fans from around the world would line up in front of Supreme stores to get a hold of the latest product,” Fischer says. “It’s not only about standing in line to buy a new product. It’s just as much about being there with a community that you’re a part of.”

CNN moves on to explain how Supreme Italia is seeking to capitalize on that community via a legal loophole and challenge a company valued at $1 billion.

Supreme Italia is what trademark lawyers call a “legal fake” licensed under a UK private limited company called International Brand Firm (IBF). It has registered its trademark in a number of countries, including Spain (as Supreme Spain), where it has four physical stores. The reason it’s able to do so legally is because IBF registered the trademark in Spain before Supreme NYC did.

The report echoes the findings of Highsnobiety’s own trademark lawyer, who looked into the matter earlier this year. Find our lawyer’s explainer here and watch CNN’s report on Supreme Italia in the video up top.

15 Drops
The 15 Best Products to Drop This Week & Where to Buy Them
SelectssponsoredApril 14, 2019