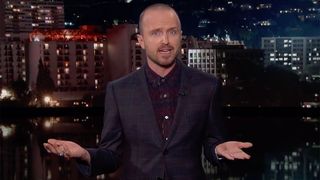 With Breaking Bad ending six years ago, even the show’s most loyal fans need a refresher before El Camino: A Breaking Bad Movie arrives. To clear things up the Jesse Pinkman himself, Aaron Paul, went on Jimmy Kimmel to give the most concise yet thorough recap of all five seasons.

The actor delightfully retells the series from beginning to end. “There’s this chemistry teacher named Walt who gets cancer,” he starts,  before delving into the plot’s leading storyline “Then Walt starts cooking meth to pay for his medical bills, with the help of his former student, Jesse Pinkman.”

Over a two-minute run down Aaron Paul says “Science, bitch!” a lot, gives a briefing of everyone who died, reminds us of that time Danny Trejo’s decapitated head was on a turtle, or how Jesse and Walt spent a whole episode trying to kill a fly and gives a shout out to Saul’s spin-off show.

El Camino releases this Friday, October 11, so you won’t have time to watch all five seasons and 62 episodes anyway, just watch Aaron Paul’s entertaining recap above.