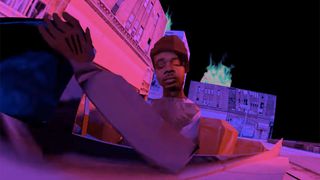 After linking up with Pusha-T on the track “In Cold Blood,” alt-J now debuts the official video for “Deadcrush (feat. Danny Brown) (Alchemist x Trooko Version).”

We are honoured to share the video for the Alchemist x Trooko version of "Deadcrush" featuring @xdannyxbrownx with you. @jeronbraxton did an incredible job with the video and we appreciate the work everyone has done to make this one happen. (Link to full video in bio)

The single is off alt-J’s forthcoming album, REDUXER, due out later this month, and the visual, directed by Jeron Braxton, boasts a ’90s video game-inspired theme, featuring rapper Danny Brown dropping his bars accompanied with a barrage of trippy hypnotizing sequences.

Director Jeron Braxton had this to say about the video, “Visually the video tells the story of how the CIA introduced old guns and cocaine into the black community in order to raise funds for the Nicaraguan contras,” explains Braxton.

“The introduction of weapons and cocaine in the black community gave power to the War-on-Drugs and the amount of Black men incarcerated creating this violent cycle of destruction that plagues the black community today. The blue flames represent the violent cycles of destruction. The demons creating the fire symbolize how drug addiction and gun violence are like demons that posses its victims to keep the cycle going. Slavery never really ended but just evolved into mass incarceration.”

This track, along with 10 other songs on REDUXER, is a reinterpretation of songs from alt-J’s third album, RELAXER, which has been reimagined by various hip-hop artists and producers.

REDUXER will be available on September 28 via Canvasback/Atlantic, and you can stream it via Apple Music below. Also, you can pre-order it here now.

In other music news, 50 Cent trolls Kanye West with “Slavery Was a Choice” Nike parody ad.