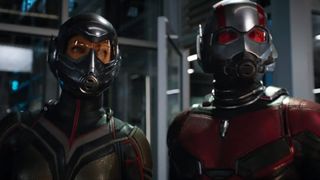 Ahead of this summer’s release, Marvel today gives us a new look at Ant-Man and the Wasp. The film is set before the events of Avengers: Infinity War, as Scott Lang has gone home to be with his family as opposed to joining Captain America’s team of underground superheroes.

Here, we find Hope Pym (played by Evangeline Lilly) and her father Hank (Michael Douglas) needing Lang to return as Ant-Man. Hope now has her own suit as the Wasp, further making Ant-Man and the Wasp a dynamic duo to be reckoned with.

Hannah John-Kamen then stars as the film’s antagonist, portraying Ghost, while Michael Peña is back, and Michelle Pfeiffer joins the cast as Hank’s presumed-dead wife, Janet Van Dyne.

Press play above for another glimpse at what to expect from Ant-Man and the Wasp, due in theaters July 6.

In related news, here’s how much ‘Avengers: Infinity War’ cost to make.

This Gorgeous NASA Doc Was 50 Years in the Making & Critics Are Going Wild
MoviessponsoredJanuary 30, 2019