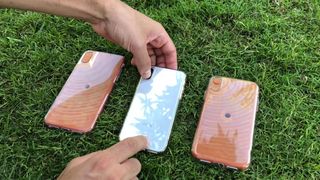 As the summer heats up, so do iPhone rumors, and with the smartphone’s annual early fall release getting closer, we might have just received our very first look at what 2018’s iPhones will look like.

Apple news leak website 9to5Mac recently posted a video of what it claims to be dummy models of the 2018 iPhone models. Although analysts suggested recently that they expected Apple to ditch plans for a budget iPhone, 9to5Mac claims to have both a dummy version of the new 6.5-inch iPhone X Plus and a dummy of the 6.1-inch “budget” iPhone. 9to5Mac also noted that it had received accurate dummies for previous iPhones from the same source in the past.

Check out the video above, in which the two dummies are compared to an iPhone 7 Plus, and then leave your thoughts on these rumors in the comments.

In other news, LeBron James is a Laker.