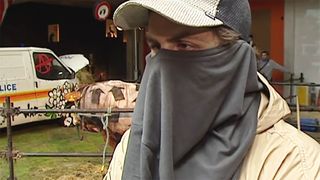 A recent rummage through the news vaults of British television network ITV has unveiled a long-lost interview with a young man who claims to be Banksy. Watch above.

Recorded in 2003, the interview with the notoriously elusive graffiti artist was taken just before his breakthrough exhibition “Turf War” in London. The video shows the man, whose face remains largely obscured by a baseball cap and a tee pulled over his face, stenciling a black insect on a wall.

“I’m disguised because you can’t really be a graffiti writer and then go public,” he told ITV News reporter Robert Murphy, who unearthed the footage while researching the artist. “The two things don’t quite go together.”

On his work, the interviewee added, “It’s hard to make an entertaining picture at the best of times, but at least if you have something that wanders around and licks its nose and urinates in front of you, it’s going to make the picture a bit more interesting.”

Of course, none of this means that the figure is definitely Banksy, especially as what we see of the man in the interview differs from previous descriptions that portrayed the street artist as a mix between British actor and singer Jimmy Nail and The Streets’ Mike Skinner.