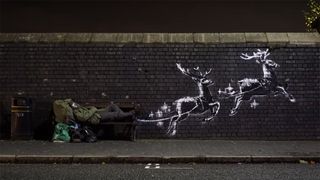 Banksy has unveiled his latest mural, located in Birmingham, UK. Placed ahead of the holiday season, the piece spotlights homelessness in England during this time of year. The mural appears just days ahead of the UK’s general election on December 12.

The celebrated street artist took to social media to reveal his new artwork, depicting reindeer attached to a public bench. Seated on the bench is a homeless man Banksy refers to as Ryan.

“God bless Birmingham,” Banksy says in his Instagram caption. “In the 20 minutes we filmed Ryan on this bench passers-by gave him a hot drink, two chocolate bars and a lighter – without him ever asking for anything.”

. God bless Birmingham. In the 20 minutes we filmed Ryan on this bench passers-by gave him a hot drink, two chocolate bars and a lighter – without him ever asking for anything.

Banksy is no stranger to addressing social and political issues. His new mural arrives as homelessness has reached record highs in the UK. Approximately 320,000 people are currently homeless in England, with 1 in 73 people in Birmingham homeless.

Banksy Responds After His Brexit Mural is Mysteriously Painted Over
DesignsponsoredSeptember 13, 2019

This “Kidnapped” Banksy Statue Is Expected to Fetch Over $1 Million at Auction
DesignsponsoredNovember 17, 2019