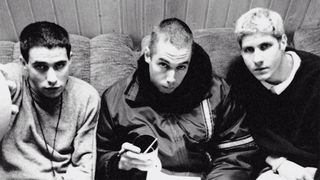 The @beastieboys’ legendary album ‘Ill Communication’ was a crucial moment for the band; we explore why on its 25th anniversary alongside Adam “Ad-Rock” Horovitz + Mike Diamond.

Pegged as one of the high points of their career, Ill Communication was the result of a rejuvenated effort following 1989’s Paul’s Boutique and 1992’s Check Your Head. For those unaware, Ill Communication brought us the unforgettable single and music video, “Sabotage.”

Still Ill: 25 Years of Ill Communication features recent interviews with Diamond and Horovitz, in addition to conversations with collaborators in keyboardist Mark “Money Mark” Nishita and producer Mario Caldato. The documentary also includes rare 1990s footage of the band, as well as insights from friends of late Beastie Boy Adam “MCA” Yauch. The portion dedicated to Yauch delves into his contributions to Ill Communication as well as his journey into activism.

Press play above to watch Amazon Music’s Still Ill: 25 Years of Ill Communication Beastie Boys documentary, then follow on over to Amazon for more on the project, including an accompanying long-form audio documentary.