As the greatest basketball player of all time, Michael Jordan’s life and career has been well documented since the outset. With documentaries about him released before he’d even won an NBA championship, there’s a lot to navigate through. From his early college years and promising start in the NBA, his first three-peat and subsequent retirement, followed by a stint playing professional baseball and his comeback to the NBA, before landing a second three-peat with the Chicago Bulls, nobody’s ever had a career quite like Mike.

Spanning 30 years, these Michael Jordan documentaries range in style and content, with some aging better than others. And since we’re sticking to docs we haven’t included Space Jam, although the film does bear similarities to Jordan’s real life. 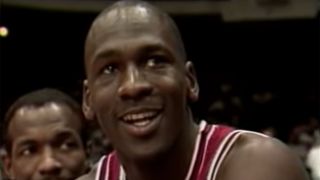 The first documentary made about His Airness, Michael Jordan: Come Fly With Me shows us Jordan before any of his six NBA championships. Released in 1989, this somewhat cheesy production traces Jordan’s early career – from his initial baseball aspirations as a child to being dropped from his high school basketball team, as well as playing for North Carolina in college and his early years with the Chicago Bulls. It even features footage of Jordan’s golf game, which certainly looks strong by all accounts.

Narrated in a classically ‘80s television voiceover, Come Fly With Me might seem like an impersonal foray into Jordan’s career, but interview segments with Michael as well as members of his family provide an intimate look into his life as a rising NBA star. 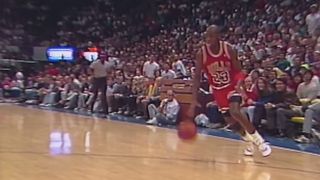 Released one year after Come Fly With Me, Michael Jordan’s Playground appears quite similar at the outset (thanks to the same production company), however the film’s thorough breakdown of Jordan as a player makes it necessary viewing for any fan. Jordan himself as well as fellow NBA players and sports commentators discuss everything from MJ’s offense game, excellence at clutch plays, his growth as a team player, pre-game ritual, and player and team match-ups that he finds most challenging. Interwoven is a kind of sweet narrative plot line where Jordan mentors a young kid who’s been cut from the high school team – just like Mike.

Come for the technical sports analysis, stay for the killer soundtrack and a strange yet satisfying music video which showcases Jordan’s dance moves. 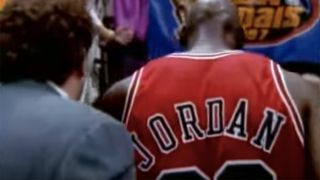 Above & Beyond covers Jordan’s life in the pivotal years when he won his third consecutive NBA championship, his father’s untimely murder and his subsequent decision to retire from basketball, the move into playing professional baseball, and finally his comeback to the NBA. The film tackles some heavy subjects, but what stands out is Michael Jordan’s honest and moving commentary discussing everything from how he’s grown as a player and person in the wake of his father’s death, as well as his own take on why he left and came back. You’ll recognize the format from the other Hardwood Classics Jordan docs (NB: there are a lot), but the level of access and collaboration with Jordan and other players is second to none. MJ confirms he’s a natural on camera here, making the move to acting in Space Jam all the more understandable.

ESPN’s 30 for 30: Jordan Rides the Bus attempts to cover Jordan’s baseball career and this period as well, however without any original footage of Jordan speaking on the matter, it lacks the gravitas that Above & Beyond delivers, regardless of its sometimes tired narrated sports doc format. 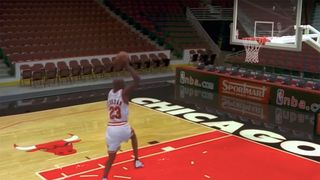 Narrated by Laurence Fishburne, Michael Jordan to the Max was an IMAX documentary released at the turn of the century. It’s probably the most well-rounded documentary made about the G.O.A.T. so far, focusing on much of his career especially the Bulls’ 1998 championship — Jordan’s sixth and final one. By this point Jordan had experienced so much, both personally and professionally, and this documentary does justice to his maturation as a player and person in general.

Slick production, great commentary from Jordan and his peers, and a satisfying look at the entire scope of MJ’s career—from high school to retirement and baseball, through to his comeback and subsequent championships—if you’re going to watch one Jordan documentary then make it this one. 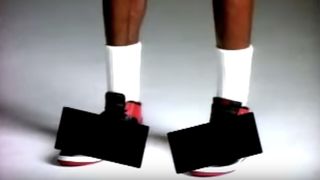 While not strictly related to Michael Jordan as a player, Unbanned: The Legend of AJ1 gives us an in-depth look at his signature sneakers—the Air Jordan 1—and the surrounding controversy and legacy they’ve created. As any basketball fan or sneaker head knows, these are no ordinary shoes; they’ve inspired a culture all of their own. And when considered in tandem with the greatest basketball player of all time, there’s a lot of history to unpack here.

Spike Lee, who’s contributed greatly to the AJ1 legacy thanks to key film cameos and a series of iconic ads for Air Jordan in the ‘80s, features in the documentary. Other notable commenters include designer Dapper Dan, Ronnie Fieg, Tinker Hatfield, Mark Wahlberg, DJ Khaled, Carmelo Anthony, and the list goes on. Watch on Hulu.

The Last Dance takes a look at Michael Jordan’s legendary career, more specifically his last season with the Chicago Bulls in 1997 and 1998. The film includes exclusive footage courtesy of an all-access pass to the Bulls, in addition to interviews with those closest to Jordan, such as Scottie Pippen, Dennis Rodman, and Phil Jackson.

The 10-episode series originally aired on ESPN in the United States, as Netflix then streamed the installments internationally the following day. It is also slated to come to Netflix in the US.

We Ranked Some of Michael Jordan’s Best (& Weirdest) Commercials
SneakerssponsoredMay 5, 2020