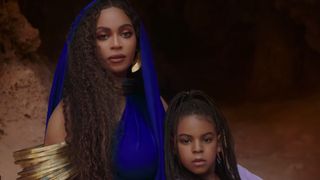 Last week, Beyoncé gave us a sonic preview of Disney‘s much anticipated The Lion King live-action remake with her song “Spirit.” This week Queen Bee released an accompanying video to the song and it’s a cinematic feast. Watch the original music video above.

Bey followed up this visual masterpiece with an extended cut of “Spirit” and “Bigger,” coming out at almost 9 minutes long. Watch the extended video below.

It looks like Beyoncé brought the visual gusto that could rival that of the Jon Favreau-directed movie. The video teems with color, waterfalls and mountains are interspersed with dramatic choreography and an adorable Blue Ivy cameo. Beyoncé sings powerfully, with gown and hair billowing, majestic as always. Every now and again there are CGI-heavy snippets from the movie.

The new video was unveiled during an ABC News primetime special on Tuesday called The Lion King: Can You Feel the Love Tonight With Robin Roberts. In the rare interview Beyoncé explained: “The concept of the video is to show how God is the art director.” Yes, she is.

The Lion King arrives in theaters later this week on July 19.