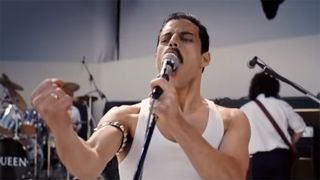 Following an initial glimpse, today we get a detailed look at Rami Malek as Freddie Mercury in the much-anticipated biopic, Bohemian Rhapsody. The film ultimately focuses on the life of the iconic Queen frontman, specifically a 15-year period from the inception of the group, to their performance at Live Aid in 1985, six years before Mercury’s death.

Alongside Malek are Ben Hardy, Gwilym Lee, Joseph Mazzello, Allen Leech, and Lucy Boynton in supporting roles, as the picture was written by Anthony McCarten. Bryan Singer was brought on at the beginning to direct the movie, but following multiple absences, he was replaced by Dexter Fletcher.

You can look forward to the long-awaited Freddie Mercury biopic, Bohemian Rhapsody, landing in theaters November 2.

In other movie news, the first trailer for Spike Lee and Jordan Peele’s ‘BlacKkKlansman’ is here.