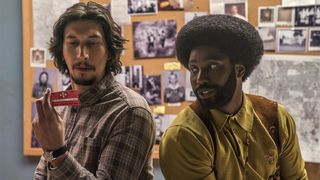 Weeks ago we got an early glimpse at John David Washington and Adam Driver in BlacKkKlansman. Now, Focus has dropped off the film’s first official trailer.

From Spike Lee and Jordan Peele, BlacKkKlansman tells the true story of Ron Stallworth (played by Washington), the first African-American detective in the Colorado Springs Police Department. Stallworth in turn set out to infiltrate and expose the Ku Klux Klan by pretending to be a white man. For this, Ron needed the help of Flip Zimmerman (played by Driver), his seasoned colleague, to be the face to his voice and brains.

You can get your first look at BlacKkKlansman, due in theaters August 10, by pressing play above.

In other news, Jordan Peele recently revealed the title and release date for his ‘Get Out’ follow-up.