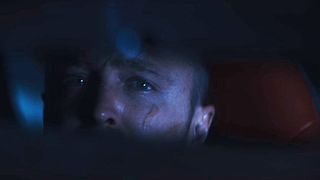 Netflix dropped a new teaser trailer for El Camino: A Breaking Bad Movie during Sunday night’s Emmys and it delivers our first look at Aaron Paul reprising his role as Jesse Pinkman. Watch above.

The film is set to pick up moments after the Breaking Bad finale, which aired back in 2013, and tracks Jesse’s actions after leaving his crystal meth kingdom co-founder, Walter White (Bryan Cranston), and driving to freedom. While the trailer doesn’t drop any action, its narration — arriving in the form of a radio announcement —  does deliver a dose of what we can expect in terms of narrative.

“Breaking news. When Albuquerque police arrived, they discovered the bodies of nine male victims, many shot multiple times. Veteran police officers are calling the level of carnage ‘staggering’ … Investigators are looking for a person of interest who fled the scene.” Of course, Jesse is that person of interest, and looks like he’s going to be in for a rough ride.

El Camino: A Breaking Bad Movie serves as director Vince Gilligan’s first feature-length film and it’s set to drop on Netflix and in select theaters October 11. In case you missed it, check out the previous trailer below.