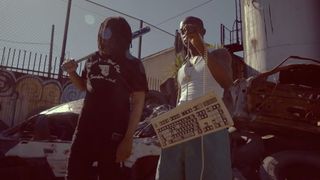 Fresh off the release of the deluxe version of Harlan & Alondra, Buddy now delivers the official video for his single “Cubicle,” featuring LA rapper 03 Greedo, and it’s one of four previously-unheard tracks available on Harlan & Alondra (Deluxe).

The LouieKnows-directed visual sees the Compton rapper stuck at a mundane day job, frustrated by the amount of paperwork on his desk. However, the mood changes when a visit from delivery man 03 Greedo, drops off a mysterious package that flips Buddy’s mindset. Buddy eventually clears up his desk and both rappers specifically take away the computer and printer, as they reenact a full-on Office Space scene by bashing on the electronics in a nearby junkyard. In the accompanying sequence, the two then hit the road and cruise down the streets of LA to get some snacks and holler at girls to fulfill the rest of their day.

Watch the video above and for more on Buddy, catch him on the road for his North American tour with Vince Staples. Peep the remaining dates below.

Buddy Returns With “Hollyhood,” the First Track From His New Album
MusicsponsoredOctober 30, 2019

Here’s Everything Coming to & Leaving Netflix This May
MoviessponsoredApril 25, 2019
Follow
Highsnobiety Music
What To Read Next
Load More
Search Results
Load More