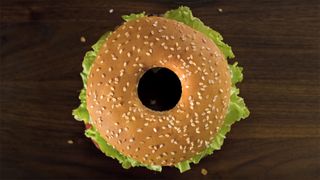 Krispy Kreme isn’t the only establishment that will be celebrating National Donut Day this week. Burger King is also taking advantage of the holiday by releasing the first flame-grilled donut ever, the Whopper Donut.

In short, the donut is merely BK’s signature Whopper burger with a hole cut in it. When you purchase the item, though, you’ll also get a complementary mini slider, aka the donut hole.

In related news, Starbucks plans to open a new store every 15 hours in China.

Noma Is Reopening as a Burger Joint (& You Don’t Need a Reservation)
LifestylesponsoredMay 18, 2020

Kanye West’s New Album ‘Jesus Is King’ May Not Be Releasing This Week After All
MusicsponsoredSeptember 25, 2019
What To Read Next
Load More
Search Results
Load More