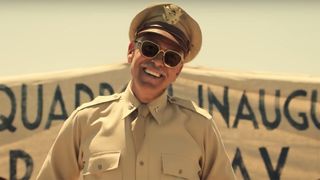 The series ultimately centers around a US air squadron in Italy in World War II. Alongside Clooney, Christopher Abbott plays a bombardier named Yossarian. Yossarian has one goal each time he takes off: to come back alive. Unfortunately, Yossarian continues to be sent out on mission after mission, further diminishing his chances at life after the war.

Yossarian and his unit have more to worry about than retreating Germans, however, with the military’s insistent tendency to invert logic whenever possible. This cannot be more evident than Catch-22, a military by-law stating that if you fly your missions, you’re crazy, and don’t have to fly them. All you have to do is ask, but if you ask, then you’re presumed sane, therefore you have to fly them.

Kyle Chandler and Hugh Laurie also feature in Catch-22, which premieres on Hulu May 17.

Here Are the 15 Best TV Shows to Watch on Hulu Right Now
MoviessponsoredApril 1, 2019

The 25 Best Music Documentaries to Stream & Where to Watch Them
MoviessponsoredJune 11, 2019
What To Read Next
Load More
Search Results
Load More