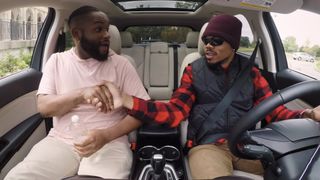 Lyft is back with a new installment from its Undercover series, as Chance the Rapper goes in disguise to surprise fans as their Lyft driver. We see the 25-year-old musician driving unsuspecting individuals throughout Chicago, while promoting the service’s Round Up and Donate feature.

The majority of the people Chance chauffeurs have no idea who he is until the big reveal at the end. He does, however, try to offer a few clues surrounding his identity, and he also details his charity, The New Chance Fund (along with the help of SocialWorks), supporting Chicago Public Schools.

To donate to The New Chance Fund, simply opt in to Round Up and Donate by clicking “Donate” in the menu of your Lyft app.

In other news, Chance the Rapper thinks Kanye West “does a lot of stuff for the attention.”

Fans Are Trolling Chance the Rapper for Missing 11 Shots in a Row
MusicsponsoredNovember 9, 2019
Follow
Highsnobiety Music
What To Read Next
Load More
Search Results
Load More