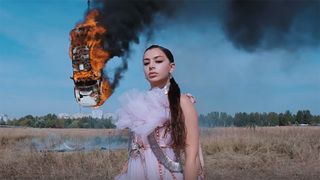 Charli XCX supports her new album, Charli, by releasing the official music video for standout track, “White Mercedes.” Similar to her clip for “Gone,” she worked with Colin Solal Cardo on the video, which was filmed in Kiev, Ukraine.

Adhering to the name of the track, the visual is filled with white cars, including a vicious monster truck, while also featuring a white horse. Further cinematic value is added with illuminating fireworks towards the end of the video.