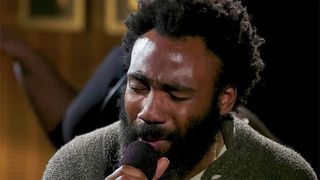 Childish Gambino stopped by Australia’s Triple J radio station over the weekend to perform an unexpected country track on its long-running series, Like a Version. Watch above.

He opted for a rendition of Garth Brooks’ (aka Chris Gaines) late ’90s country track, “Lost in You.” The song is gentle and romantic, featuring lines like, “I’m head over heels and it shows / I’ve played every field I suppose / But there’s something about you, when you’re around / Baby I have found, I get lost in you.”

Of course, Gambino more than does justice the the original and adds his own flavor throughout the cover, switching up the OG guitar strumming for gospel backing and electric piano.

Check out the original below.