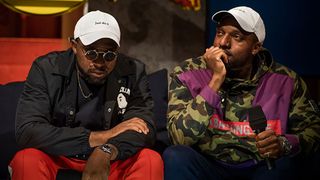 The entire music industry would be nothing without the people making everything happen behind-the-scenes, but for the most part, everyone’s eyes and ears are locked on those that take the stage. Christian Rich, twin brothers Taiwo and Kehinde Hassan, have been doing their part for nearly two decades to try to change that. We previously caught up with the production duo a few months back, giving us insights into their creative process and how they’ve hustled over the years. Now, we’ve got the exclusive on their lecture at Red Bull Music Academy in Berlin.

Over the course of an hour, the brothers talk about their approach to songwriting, working with the likes of Earl Sweatshirt, Vince Staples, Jaden and Will Smith, and Drake. Former investment bankers, they also discuss the importance of applying their financial savvy to their music career and their forays into the world of design.

Check out Christian Rich’s RBMA Lecture above, and let us know what you think in the comments.

In other music news, Jaden Smith talks fashion, transitioning to rap, and more.