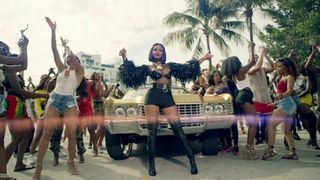 City Girls is ushering in summertime with a blazing video for “Act Up.” The visual opens with Lil Yachty playing the role of a very convincing broadcast news reporter informing the public about the “Act Up Challenge” that has caused a “Spring Break shut down.” From there, footage of Yung Miami and her twerking friends causing mass hysteria on the beach rolls out.

According to Vibe, City Girls member JT was recently denied her request to be released early from prison. “Act Up” is featured on the rap duo’s 2018 EP, Girl Code. Stream the full project now via Quality Control and revisit our review here.

JT of City Girls “Will Be Home Within the Next 90 Days” Says Quality Control CEO
MusicsponsoredJune 26, 2019