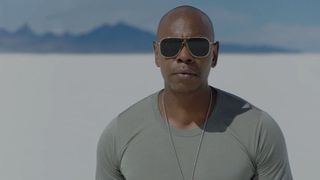 Dave Chappelle is returning to Netflix this month with a brand new stand-up special, Sticks & Stones. The streaming service announced the special today with a trailer narrated by Morgan Freeman.

None of the new material is shown, but there is the novelty of the voice of god swearing and riffing on why the hell Chappelle is in the middle of the desert, plus Dave rocking head-to-toe Rick Owens. According to the video description, Chappelle will touch on celebrity scandals, the opioid crisis, and more. This marks his fifth special for Netflix.