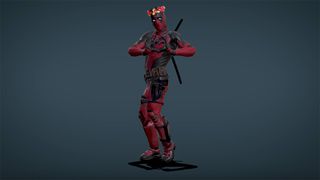 Deadpool 2 is out today in the UK, as Twentieth Century Fox and Snapchat have in turn partnered to unleash a new augmented reality lens that showcases Deadpool himself dancing to Diplo‘s latest track. Set to “Welcome to the Party” featuring French Montana and Lil Pump, the song (above) can be found on the Deadpool 2 soundtrack, which arrives May 18.

One for you @VancityReynolds. #Deadpool2  takes Piccadilly Circus on Snapchat. And for info, it’s @diplo. pic.twitter.com/GxsbCkOZyd

To utilize the Snapchat lens, simply tap the screen and select the Deadpool icon. You can also put yourself directly into the arms of the superhero by using the face lens.

The Deadpool lens is available beginning today in the U.S. and the UK, as France will receive on May 16 and Germany on May 17. It will also hit Italy, Spain, the Netherlands, Sweden, and the UAE from May 15 to May 21.

Now, see below for some of the other recent promos surrounding Deadpool 2.