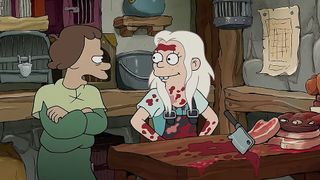 An extended trailer for Matt Groening’s Netflix animated fantasy series Disenchantment dropped during San Diego Comic-Con this weekend, offering a closer look at the residents of madcap medieval world Dreamland. Check it out up top.

The Simpsons and Futurama creator’s new comedy shows how Bean (voiced by Broad City‘s Abbi Jacobson) ditches her prince at the altar and embarks on a (rather booze-fueled) quest to find herself. Butchering pets and blowing up candy cottages in the trailer, Bean and pals Elfo (Nat Faxon) and Luci (Eric André) create typically-Groening style mayhem as they venture through various tongue-in-cheek scenarios, including royal weddings, sinking carriages, and a nod to Game of Thrones.

The animation, as you would expect, is stunning, incorporating CG backdrops and 2D character art to build a world full of sprawling fantasy vistas.

Disenchantment lands on Netflix August 17. Are you hyped? Let us know your thoughts on the trailer in the comments.

Next, Netflix offers a first look at ‘Narcos’ season four.