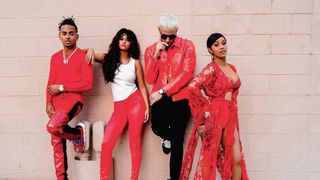 Following a collab with Gashi and French Montana on “Creep On Me,” DJ Snake returns with a new track dubbed, “Taki Taki” featuring some of Latin music’s heavyweights with Cardi B, Selena Gomez and trap star Ozuna.

With the track exuding a club banger vibe with its bumpy and sultry-infused reggaeton tune, the song also emphasizes Selena Gomez and Cardi B embracing their Latin heritage. Both artists sing their verses in both Spanish and English, while Ozuna delivers his bars completely in Spanish.

Additionally, DJ Snake explained how the collab came to fruition in an exclusive interview with Billboard while on the set of filming the music video. “I wanted to make a reggaeton, club record,” he reveals. “So, I sent it to Ozuna and he crushed it; I’m a big fan of Ozuna. He crushed it! And then I wanted more females on the record—and Spanish-speaking, you know? Two queens right here. That’s what I wanted to do, and they blessed me with this greatness and dope energy. Selena and Cardi is a great combo.”

Listen to DJ Snake’s “Taki Taki” above , and let us know what you think of the reggaeton banger below.

In other new music, Tommy Genesis drops “Daddy,” and announces a self-titled album.