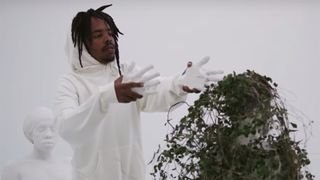 Following the release of Some Rap Songs from November of last year, Earl Sweatshirt teams up with award-winning filmmaker Terence Nance to premiere his new short film, titled Nowhere, Nobody. Co-directed by Nance and Naima Ramos Chapma, and starring Earl among others, the picture further supports the LA rapper’s recent album by bringing the project to life, reimagining its challenging concepts in full scenes.

In addition to the short film, Earl Sweatshirt announces his upcoming North American tour, which kicks off in March and running into May. The tour includes 31 shows, with accompanying acts MIKE, BbyMutha, Na-Kel Smith, LIV.E and Black Noi$e.

See below for dates and locations.

Some Rap Songs served as Earl’s first full-length project since his 2015 sophomore album I Don’t Like Shit, I Don’t Go Outside. The LP finds earl reflecting on his life and music, while also showcasing both his sonic and personal evolution.

You can revisit Some Rap Songs underneath.