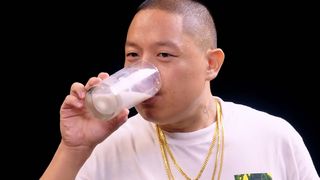 American chef and restaurateur Eddie Huang showed he isn’t chicken by returning to the Hot Ones hot seat yesterday.

For those unfamiliar with the web series’ format, every week a different celebrity is interviewed by presenter Sean Evans as they munch their way through a series of progressively spicier hot wings. Two years ago, Huang admitted defeat after gnawing on the hottest wing first, but now he’s back for take two.

At the start, Huang details what went wrong first time around, describing his new strategies for defeating the fiery wings. He also offers details about his upcoming show Cash Only, which looks at migrant-owned restaurants around the world. “I wanna go to these countries and take the local route like I always have,” he says, citing the late Anthony Bourdain as a mentor and influence.

But to see if Huang manages to run the clucking gauntlet, you’ll have to press play on the video above.

Elsewhere, in case you missed it, last week Jeff Goldblum took the Hot Ones seat, where he talked Jurassic Park and meeting Quavo from Migos.

Ashton Kutcher Reveals He Just Threw Away All His Trucker Hats on ‘Hot Ones’
MoviessponsoredSeptember 27, 2019
What To Read Next
Load More
Search Results
Load More