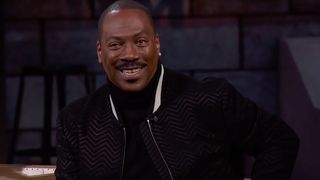 Last night, Eddie Murphy stopped by Jimmy Kimmel Live to talk everything from the Oscar buzz he’s getting for his new movie Dolemite Is My Name, working on the Coming to America sequel, returning to stand-up, and revealed his plans for when he hosts Saturday Night Live.

In the 14-minute interview, Murphy opened up about his plans for hosting SNL after 35 years, revealing his plans to bring back some classic, fan-favorite characters. “Oh yeah, I’m gonna do Gumby,” he told Kimmel. “And I’m trying to figure out some reason to do a Velvet Jones and ‘Mister Robinson’s Neighborhood.’”

Murphy, who largely retreated from the limelight in the mid-2000s, has returned in a big way. His new movie Dolemite Is My Name slates him as a major Oscar contender and the comedian is gearing up for more blockbuster success with the upcoming  Coming 2 America. He’s also announced his plans to do a stand-up comedy special. Kimmel asked Murphy if he was worried about returning to stand-up. “I don’t be worrying about stuff like that,” he replied. “I tend to think constructively if I’m doing something creative. I’m thinking about making it as funny as possible because I wanna shut shit down when I do it.”

You can watch the full interview above.