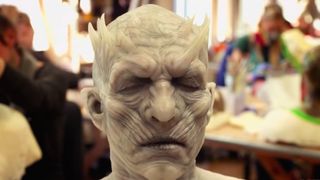 The eighth and final season of HBO‘s Game of Thrones premieres on April 14, and following its long-awaited first trailer, HBO has unveiled a behind-the-scenes look on just how the notable actors in the series are outfitted into their characters’ signature aesthetics such as the Night King, White Walkers, the Children of the Forest and more.

Designer Barrie Gower gets into the time-consuming but incredible use of prosthetics on #GameofThrones.

In the clip above, Game of Thrones prosthetics designer Barrie Gower reflects on bringing the show’s fantasy vision to life and explains just how the work has turned into a mass industry with around 50 people working on prosthetics on set for up to 70 actors simultaneously.

“I don’t think people are quite aware of how extensive [the prosthetics process] is,” explains Barrie Gower. “It’s such a complex department, and the build that goes into these things is quite time-consuming.”

The process begins with each actor coming into the studio to have molds taken of their face and head. In particular, actors like Vladimir Furdik who plays the Night King, spend a lot more time getting his face and horns applied. But, as Gower expressed, “It’s lovely to see all our hard work and all these things we’ve built, actually make it to the screen a the end of the day.”

Additionally, the clip reveals that a basic set of prosthetics work can take about four to six weeks to build, while applying it at the beginning of a day can take up to almost a whopping eight hours to complete.

Enjoy the video above, and once more, season eight of Game of Thrones premieres on HBO on April 14.

This Video Captures One Second From Every Episode of ‘Game of Thrones’
MoviessponsoredMay 21, 2019

Here’s What the Internet Had to Say About the ‘Game of Thrones’ Premiere
MoviessponsoredApril 15, 2019
What To Read Next
Load More
Search Results
Load More