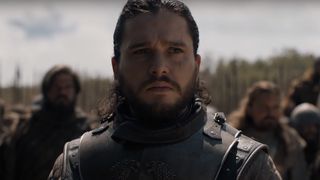 HBO was quick to follow up episode 4 of Game of Thrones with a tense teaser to next week’s episode. In the wake of Missandei’s death at the order of Cersei, we find a brooding Daenerys presumably plotting her revenge as she stares out a window. Cut to a smug Cersei as she too looks out her window, this time at King’s Landing.

The teaser is clearly designed to build tension for the next battle as Jon Snow, Euron Greyjoy and Grey Worm prepare for conflict in their respective camps.

We see an updated “Scorpion” being loaded in anticipation of another dragon attack and Greyjoy looking anxiously at the sky.

Go Behind the Scenes of Last Night’s Devastating ‘Game of Thrones’ Episode
MoviessponsoredMay 13, 2019

This Video Captures One Second From Every Episode of ‘Game of Thrones’
MoviessponsoredMay 21, 2019
What To Read Next
Load More
Search Results
Load More