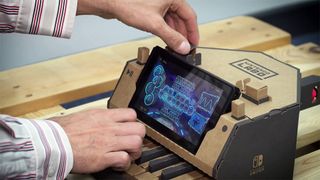 Following Ariana Grande and The Roots’ performance using Nintendo Labo on The Tonight Show Starring Jimmy Fallon, the gaming and toy construction platform is being utilized once again, this time featuring a Nintendo Labo Piano.

In a video by IGN, the publication tapped acclaimed composer Ramin Djawadi, best known for his score of the Game of Thrones theme, to see if he can reproduce the iconic tune once more, but only utilizing the cardboard piano and Nintendo Switch console to rock out the theme song.

As you can see above, the outcome is far from the symphonic original, but still an impressive rendition considering Ramin had never used a Switch and Labo before.

In related news, HBO is filming multiple endings for the ‘Game of Thrones’ season eight finale.

Work From Home
30 Games You Can Download Online & Play With Friends For PS4, Xbox One and Switch
LifestylesponsoredApril 18, 2020

Elevate Your Sustainability Game With These Noah “Garbage” Tees
StylesponsoredAugust 31, 2019