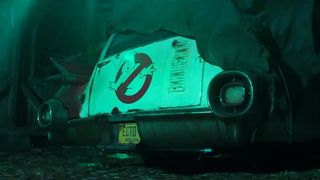 A sequel to the original Ghostbusters films is finally in the works. Being helmed by director Jason Reitman, who’s previous work includes Juno and Up in the Air, the next installment in the franchise has been quietly being made with a 2020 release date. To hold fans over, a teaser for the film dropped online today bringing the eerie, spooky goodness we’ve been waiting for since 1984.

The short trailer starts off with a shot of a barn during a cloudy night. As the camera moves closer and closer, we start to hear someone tinkering on a machine while flashes of green light illuminate the night. The late Elmer Bernstein’s eerie score from the library scene of the 1984 original starts to play as we get a quick glimpse of the iconic Ecto-1 car.

Where’s the ghost squad of Stantz, Spengler, Zeddemore, and Venkman? Why is the greatest Cadillac of all time collecting dust in a barn? Whose barn is this? All questions we sadly won’t get answers to for another year, but at least it’s already looking better than the train wreck 2016 reboot.

Are you excited for the new Ghostbusters film?

After, watch the first trailer for Spider-Man: Far From Home.