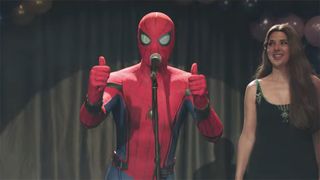 Sony Pictures has just unveiled the first trailer for its upcoming Spider-Man: Far From Home movie.

The sequel to Spider-Man: Homecoming, Far From Home sees Tom Holland’s Peter Parker travel to Europe with friends during his summer break.

The trailer shows Parker debating whether or not he should take his suit with him on the trip, struggling with his feelings for MJ, and — ultimately — being enlisted by Nick Fury to help fight the Elementals.

The Elementals are the “bad guys” this time around and consist of Hydron (Lord of Waters), Magnum (Master of the Earth), Hellfire (Wielder of Flame) and Zephyr (Mistress of The Winds).

The movie sees Holland’s Spider-Man team up with Jake Gyllenhaal’s Mysterio, who was previously thought to be a villain until Gyllenhaal set the record straight last month.

Watch the trailer above and look for Spider-Man: Far From Home to land in cinemas July 5 of this year.

Next, check out Virgil Abloh’s Louis Vuitton FW19 invite, which was a Michael Jackson-inspired glove this year.