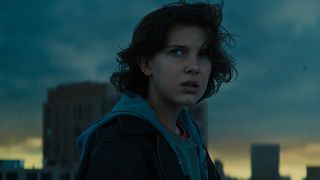 Courtesy of San Diego Comic-Con, we get our first extended look at Godzilla: King of the Monsters. The official trailer stars Millie Bobby Brown and Vera Farmiga, who plays scientist Dr. Emma Russell.

According to Dr. Russell, Earth is infected and humans are to blame. This leads several monsters — including Godzilla, Mothra, Rodan, and the three-headed King Ghidorah — to come out of hiding and battle each other.

The trailer’s release follows a teaser, which was unveiled by Warner Bros. just a few days ago.

Godzilla: King of the Monsters is directed by Michael Dougherty and will hit theatres on May 31, 2019.

Watch the trailer above and leave your thoughts in the comments.

In other movie news, ‘Guardians of the Galaxy’ director James Gunn was fired for offensive tweets. Read more on that here.