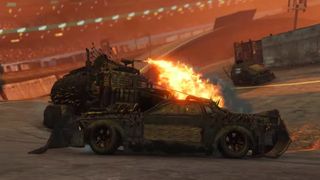 This past summer, an update on GTA Online enabled users to cop adidas x Palace-inspired garments. Now, Rockstar Games has unleashed the next biggest installment of the title with “Arena War,” a new and intense stadium-based competition series with seven new modes, a range of Maze Bank Arena-ready vehicles, and modifications available in the brand new workshop, as well as special unlocks and more.

In particular, the seven new modes are titled Carnage (vehicle death-match), Flag War (capture the flag), Wreck It (trap-heavy racing mode), Tag Team (tag in and out of the fight with another player), Games Masters (one team hits checkpoints while opponents control hazards to stop them), Here Come the Monsters (survival mode against an opposing team of monster trucks), and Hot Bomb (one player has the bomb, and the only way to get rid of it is by crashing into someone else).

The update also adds the Arena Workshop, where vehicles can be customized to your liking, based inside the Maze Bank Arena. Additionally, 12 new vehicles have been added, which are available to view on the new in-game site ArenaWar.tv.

Also, peep our exclusive interview with renowned DJ Dixon on being a part of ‘GTA Online: After Hours.’