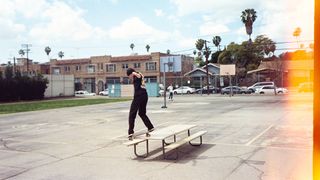 Hélas, the skate brand founded by professional skater Lucas Puig, has just unveiled its first-ever, full-length skate film. The film, dubbed “Fellas,” was premiered at an event on the Eiffel Tower in Paris last month before being shown in Tokyo (Tower Records Shibuya), Barcelona (Sour Solution Skateshop) and Shangai (Cinema).

Speaking to Highsnobiety about the film and its premiere Puig says, “The Eiffel Tower is the symbol of France so it made sense for us as a French brand. An event like this has never been organized there before. The atmosphere, the spot, and the vidéo made it magic and one of the best premieres for sure!”

The movie is only available on USB keys or DVD, both of which can be purchased on the brand’s official website. Check out an exclusive snippet above.