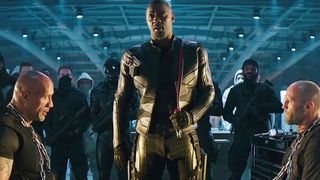 Vin Diesel might be missing from Hobbs and Shaw, the first Fast and the Furious spin-off movie, but it doesn’t seem like that will stop it from delivering all the ridiculous, muscle-bound action sequences the franchise is renowned and loved for.

In the first trailer, audiences are reintroduced to Luke Hobbs (Dwayne Johnson) and Deckard Shaw (Jason Statham), who link up to take on the movie’s antagonist, Brixton (Idris Elba). This involves scenes in which Hobbs can be seen pummeling a villain while sliding down the side of a skyscraper, sports cars sliding underneath giant lorries, and Jason Statham being, well, Jason Statham.

The Rock, Kevin Hart & Jack Black Fight Across the Desert in ‘Jumanji: The Next Level’ Trailer
MoviessponsoredOctober 31, 2019
What To Read Next
Load More
Search Results
Load More