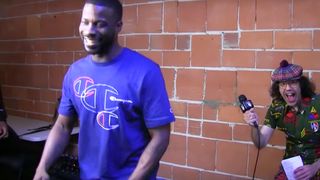 It’s a scientific fact that Nardwuar is the best interviewer of all time. I don’t make the rules. His latest subject is none other than Jay Rock, the Top Dawg Entertainment OG. In the latest video from Nardwuar the Human Serviette, the rapper gets grilled on the early days of TDE, how he met founder Top Dawg, and much more. On-point gift-giver Nardwuar even gave Jay Rock a vinyl copy of an early Jay Rock and K. Dot (Kendrick Lamar) record.

Recent TDE signee Reason came through the interview, as he was also in Nardwuar’s native Vancouver to play a show with Jay Rock at the Imperial. The Human Serviette did not let him leave empty handed, however, gifting the lowkey comic book fan an original Spiderman “talking book” from the ’70s. Check out the full video above, and let us know what you think in the comments below.

In other music news, Anderson .Paak’s sophomore album ‘Oxnard’ is set to drop in November.