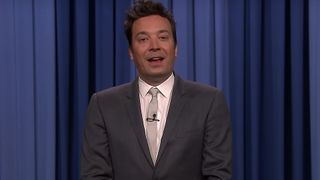 After being scolded for his lighthearted interview with then-presidential candidate Donald Trump in 2016, Jimmy Fallon used yesterday’s episode of The Tonight Show Starring Jimmy Fallon as an opportunity to roast POTUS, and in the process join the numerous TV hosts who use their platform to throw burns in Trump’s direction. Watch the clip above.

The roast was, in fact, a smack back to President Trump’s tweet earlier that day, which attacked Fallon for telling The Hollywood Reporter that he regretted Trump’s appearance on his show. “I made a mistake. I’m sorry if I made anyone mad. And, looking back, I would do it differently,” he told THR‘s Awards Chatter podcast. Naturally, Trump was not impressed.

.@jimmyfallon is now whimpering to all that he did the famous “hair show” with me (where he seriously messed up my hair), & that he would have now done it differently because it is said to have “humanized” me-he is taking heat. He called & said “monster ratings.” Be a man Jimmy!

Laying into everything from FLOTUS Melania Trump’s anti-bullying campaign to Trump having way too much time on his hands, Fallon made a point of distancing himself as far from Trump as possible. And if he hadn’t made himself clear already, he threw in the following tweet in response to the president’s mockery:

In honor of the President’s tweet I’ll be making a donation to RAICES in his name.

What do you make of Jimmy Fallon’s move? Let us know in the comments.

Next, Action Bronson shaved his beard and Twitter can’t handle it.