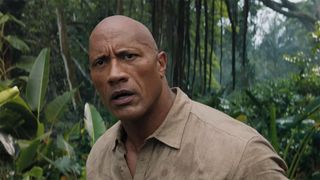 Today we get our first look at Jumanji newcomers Danny DeVito and Danny Glover in the debut trailer for Jumanji: The Next Level. The film serves as the third installment in the franchise and a followup to 2017’s Jumanji: Welcome to the Jungle.

Enjoy the first look at our JUMANJI: The Next Level.
THIS CHRISTMAS??? pic.twitter.com/1MHVi5dVmw

Dwayne Johnson, Kevin Hart, Jack Black, and Karen Gillan are all reprising their starring roles in Jumanji: The Next Level, in addition to Alex Wolff, Nick Jonas, Madison Iseman, Ser’Darius Blain, Morgan Turner, and Rhys Darby. Awkwafina and Dania Ramirez join DeVito and Glover as new faces to the franchise.

Jumanji: The Next Level finds the players returning to Jumanji to rescue one of their friends. During their journey, they quickly realize that the game has changed and they will be forced to venture to parts unknown in order to brave the world’s most dangerous game.

Jake Kasdan is back to direct the new Jumanji movie, which is written by Scott Rosenberg and Jeff Pinkner. Jumanji: The Next Level comes to theaters December 13.