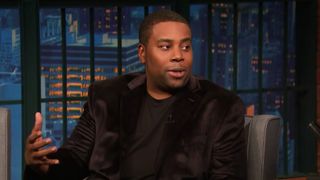 Kanye West was the featured musical guest performer for the 44th season premiere of Saturday Night Live, and the artist garnered a round of boos from the audience after making impromptu pro-Trump comments on-air.

Kenan Thompson, a member of the SNL cast in his record-holding 16th season, spoke about the premiere and Kanye West’s performance during an appearance on Late Night with SNL alumni Seth Meyers on Monday.

Thompson called Kanye’s whole appearance on the show a “circus,” and explained that SNL is a “service business,” adding that from time to time with musical guests, if “they’re a little bit crazy… we let them have that.” In regard to Kanye West, Kenan Thompson bailed out on witnessing the closing performance first-hand, and said that Kanye is entitled to his opinion, but also expressed that the closing of a live show where cast members are ordered to listen to his rant is not “the moment, necessarily, to hold people hostage like that” while you “ca-ca” over them.

Kenan said that as soon as West said, “Hey join me onstage,” he knew he’d made the right decision to watch the performance backstage, saying, “Oh, there goes the little cheese in the mousetrap.”

Kenan Thompson also spoke about the birth of his second daughter over the summer and his big Emmy win. Enjoy the clip above.