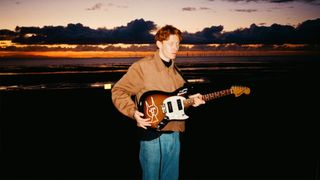 The VHS-shot film opens as Archy Marshall (aka King Krule) receives a mysterious phone call that rings out to voicemail. Marshall then performs the four new stripped-back tracks against various stark landscapes.

The film accompanies the news that the British rapper will be embarking on a transatlantic tour next year. The tour kicks off in Brussels on March 3 and ends on April 24 in Brooklyn. Take a look at the full schedule below.