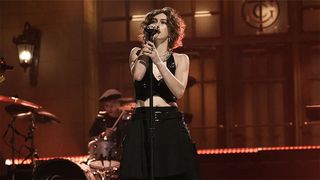 King Princess made her musical debut on Saturday Night Live last night. She performed her single “Hit the Back” from her highly-anticipated debut album Cheap Queen. The Mikaela Straus-led project also performed their debut single “1950.”

The episode was hosted by SNL veteran, Will Ferrell, with cameos from Tracy Morgan, Alec Baldwin, and Ryan Reynolds.  Saturday Night Live named DaBaby, Niall Horan, and Lizzo as the remaining musical guests for 2019.

As part of the fourth edition of our FRONTPAGE series, Highsnobiety’s Bianca Giulione spoke to King Princess about her debut album Cheap Queen, her music-making process, and expressing all the woes and wishes of a young 21st-century queer person. Read the full interview here.

Will Smith Goes Back to Bel-Air Academy for 2nd Clothing Drop
StylesponsoredOctober 1, 2019