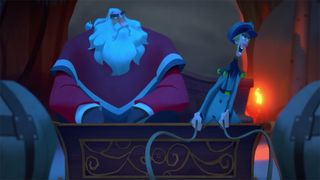 With the holidays creeping up on us, Netflix is already feeling festive, this week sharing the trailer for its new Christmas movie, Klaus. Klaus also serves as the streaming platform’s first animated feature film.

Jason Schwartzman voices Jesper in Klaus, the postal academy’s worst student, who is subsequently sent to work on a frozen island above the Arctic Circle, often referred to as the “unhappiest place on Earth.” Friends are hard to come by where Jesper is stationed, but luckily he finds allies in the form of a local teacher named Alva, played by Rashida Jones, as well as a mysterious toymaker named Klaus, played by J.K. Simmons. Together, their unlikely friendship causes joy and laughter to return to the town of Smeerensburg.