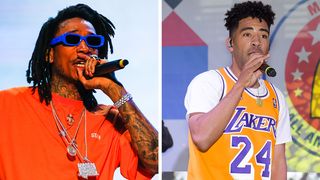 KYLE and Wiz Khalifa have come together for a new release, titled “Moment.” The track is highlighted in Netflix’s new original film, The After Party, which both KYLE and Wiz feature in.

KYLE stars as an aspiring rapper in The After Party, but once he goes viral for a rather embarrassing reason, he thinks his career is over before it even begins. After gaining access to a wild NYC after party, he has one more chance to jumpstart his dream.