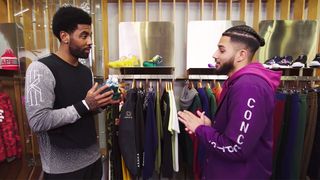 In the latest episode of Complex’s Sneaker Shopping series, Boston Celtic and NBA All-Star Kyrie Irving talks us through the various silhouettes that speak most to him, from his own collabs to his love of Nike SBs and the styles he coveted as a kid growing up in New Jersey.

Talking about his own sneaker line and the low price point that enables young fans to buy his shoes, Irving describes the fight he had to go through to keep the price tag down. “I’m so adamant in making sure that it’s affordable for everyone as much as possible,” he says. “At the same time, some heat will raise the price point a little bit after the sale.”

Irving also gives shoes to good causes when he feels he has too many pairs collecting dust. As he explains in the video, “Sometimes I’ll have a lot of my shoes and I’ll donate them to the men’s homes or the youth homes. They have better use for them over there than with me.”

Elaborating on this sense of goodwill, he says it’s largely down to his father: “I used to complain about Nike not sending me enough shoes, and my dad said, ‘Kyrie, one day you’re going to have so many shoes you’re not going to know what to do with them.'”

Watch Irving share his sneaker love in the video up top and then let us know what you think of his shopping choices in the comments.

In other news, adidas channels ’80s running with this highly wearable ZX 4000 retro.