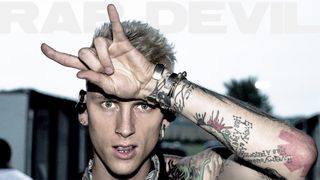 Machine Gun Kelly moves fast. Less than a week since Eminem took shots at the rapper on his album Kamikaze, Kelly has dropped a diss track called “Rap Devil.”

The song addresses Eminem’s alleged blackballing of Kelly after the rapper tweeted about Eminem’s then-16-year-old daughter in 2012:

“Let’s talk about the fact you actually blackballed a rapper that’s twice as young as you (let’s talk about it)
Let’s call Sway, ask why I can’t go on Shade 45 because of you (brrt)
Let’s ask Interscope how you had Paul Rosenberg trying to shelf me (huh?)”

On “Not Alike,” off Eminem’s recent Kamikaze album, the Detroit rapper referenced the incident:

“But next time you don’t gotta use Tech N9ne if you wanna come at me with a sub-machine gun
And I’m talking to you but you already know who the fuck you are, Kelly
I don’t use sublims and sure as fuck don’t sneak-diss
But keep commenting on my daughter Hailie”

Elsewhere on “Rap Devil,” Kelly calls Eminem old (Somebody help your mans up (Help)/Knees weak of old age), out of touch (You’re not getting better with time/ It’s fine Eminem, put down the pen”), and comes for his previous releases (“Still can’t cover up the fact your last four albums is as bad as your selfie.”) Kelly took to Twitter to explain that on the track he was “standing up for not just myself, but my generation.”

im standing up for not just myself, but my generation. im doing the same shit you did back in ur day. life is still real on my side, and i had to take time from the grind to defend myself from someone i called an idol. love, Rap Devil.

Eminem hasn’t yet responded to the diss. However, shortly after “Rap Devil” dropped, D12’s Eminem’s longtime collaborater Bizarre posted a reponse to the song, warning Kelly that he “better stop playin’ with that boy.”

Everybody asked me about how I feel about the machine gun Kelly song pic.twitter.com/o1vsMoM3WE

Listen to “Rap Devil” above and let us know what you think in the comments below.

Now, check out the other rappers Eminem dissed on ‘Kamikaze,’ including Drake, Tyler, The Creator and Lil Yatchy.