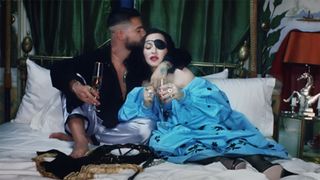 Madonna is slated to release her 14th studio album, Madame X on June 14. Ahead of the long-awaited drop, the music icon has shared a music video for the lead single, “Medellín” featuring Colombian singer Maluma.

The Diana Kunst and Mau Morgó-directed visual finds Madonna transforming into Madame X in the cinematic visual, as she brings seductive dancing and a rebellious spirit into another dimension. Madonna and Maluma are scheduled to perform the song live for the first time at the Billboard Music Awards on May 1.

“Lisbon is where my record was born,” she said in a press release. “I found my tribe there and a magical world of incredible musicians that reinforced my belief that music across the world is truly all connected and is the soul of the universe.”

Madame X serves as a celebration of Madonna’s admitted affinity for Latin music and culture, heavily influenced by her time recently living in Lisbon, Portugal. Recorded over 18 months in Portugal, London, New York, and Los Angeles, she sings in Portuguese, Spanish, and English throughout the album. Quavo and Swae Lee are also featured on the record.

Watch all the drama unfold in the video above and scroll down for the full tracklist.